Guitar Practiced Perfectly is a piece of software that helps a guitarist manage and plan practice routines. It includes 300 or so practice routines out of the box. Routines can be organized into sessions. Sessions can be organized arbitrarily, but the software supports daily sessions. It’s written in Adobe Air so it will run on Mac and PC. I’m running on Windows 8 64-bit.

I’ve only used the software for one practice session so far. The overall effort is very good. As far as I know, it’s the only software of its kind. At $50 US, it’s a little pricey to buy without a trial. 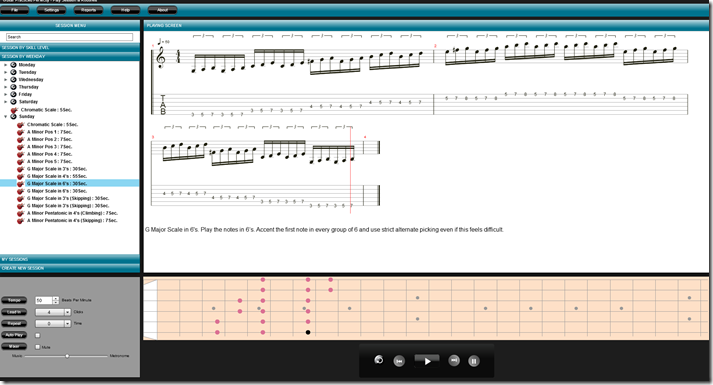 I like Guitar Practiced Perfectly very much and I’ll get a lot of use out of it. However, it’s not the software I was hoping it was. The lack of routine-creation and editing functionality means it misses the mark by quite a large margin. Some of the UI constraints make working with sessions very hard. For an intermediate player such as myself, it will definitely help me take my playing to the next level. However, I’ll not be able to use it to integrate my teacher’s lessons into my daily practice.