Yodelay has been updated. I’ve modified the Regular Expression tester so that it supports n-number of test contexts with a single expression. In addition, you can search regexlib.com for a useful expression.

This screen is fully implemented using MVVM. The search window serves as an example of using MVVM with dialogs.

I’ve also pulled in the themes from WpfThemes and integrated the ThemeManager. 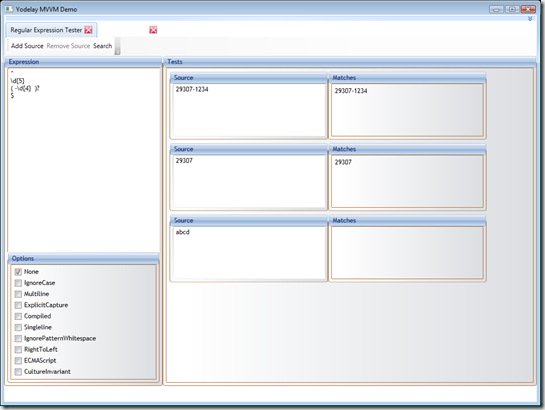 I have created an open-source project on CodePlex called “Yodelay”. From the project description:

The Yodelay .NET Framework Extensions project provides a library of components that make many kinds of programming tasks simpler. These include basic MVVM components, Unit Test Extensions, and a poor-man’s Dependency Injection library.

Most of the classes and extension methods in this library are rei-mplementations or adaptations of components I have written in other places. Some of them have been found in various forms on developer blogs. Where this is true, I have indicated where I retrieved the original source code in the comments. This library is not just a collection of random classes. The attempt here is to bring all of these components together and use them in an integrated fashion to develop stable applications faster.

Not all code in this project is currently covered by unit tests. This is because many of the classes were adapted from blogs or other existing projects and may not have been developed using TDD. Every effort will be made to bring existing classes under test coverage, and to practice TDD when adding new code.

Why did I call it Yodelay? For no other reason than I like the way the word sounds. It rolls off the tongue easily, which is the effect I hope the library has on applications.

There is no installer yet. Yodelay is in version 0.1, but there are already quite a few goodies in the library. Everything is built against the 4.0 framework. I will try to work on it a little each week, adding new components and demo projects when I can. In the near future I will be signing the assemblies and building an installer for them.

Writing a function is an act of design. You must choose the placement (both physical and logical), signature, and name of the function carefully. Most people understand vaguely that functions should have minimal scope, but I’d like to draw attention to a couple of design implications of public functions that I haven’t heard discussed much. These features are "permission" and “precedent.” Simply by existing, a function indicates that it is okay to call it, and establishes a precedent for the choices that led you to create it with the characteristics you chose.

When would you not want to publicly expose a function? Or what are the reasons you might wish to refuse calling permission to a function?

Why would it be wrong to simply allow the clients of the code to instantiate WidgetListEditor at will and use the sorting method? It exposes the rest of the code to changes in WidgetListEditor. WidgetListEditor could be modified such that it loads an expensive resource when constructed. The maintainers of WidgetListEditor have no reason to believe that adding the expensive resource should cause any problems because as far as they know, this class is only instantiated once on a couple of screens. Suddenly the system is brought to a crawl because it is in fact being used all over the place as a means of “reusing” the sorting code. This is a problem of responsibility.

WidgetListEditor needs to be changed to allow arbitrary sorting by the user. This requires that the sorting methods be changed to accept a sorting criteria–but that change is made more difficult because the methods are being consumed application-wide instead of on the one or two screens the class was built for.

WidgetListEditor no longer needs to presort the contents of the list before binding, so the developer wishes to remove the sorting code–only s/he can’t because the methods are being consumed application-wide instead of on the one or two screens the class was built for.

There’s a recurring theme here: What was the class built-for? What is its exposure to change? A public method is a kind of contract with the rest of the code. Changes to public methods must be considered with greater care because of the potential effects with the rest of the code-base. When we make a method private, we reduce the potential of damage to the system if the method needs to change, or be removed altogether. This is the design advantage of encapsulation. For this reason, every function in the system (and every class in a library) needs to have the least significant scope it is possible to give it.

There is another kind of permissions problem related to public methods that is harder to pinpoint. Sometimes a method is created that does a narrow-purpose task that is needed within the system, but has the potential to corrupt the system. Posit a financial system in which every transaction is recorded as a series of debit-credit pairs. For the most part the system does not allow direct editing of entries. Instead it functions through a series of transaction templates. You submit a transaction, and the template tells it which accounts to debit, to credit, and how much, etc.. It is discovered that a rounding error creates a small reporting variance and your manager assigns you the task of creating a manual correction screen.

Since this is a transactional system, the right way to solve this problem is to create an AdjustmentTransactionTemplate and enter it into the system, but that would take a week, and you only have a day. So, you take a short-cut. You create a new method in the data access layer that lets you simply update the entry directly. You reason that since this is the only code that calls this method, it’s safe because you will be sure to update both the debit and credit together, and with the same amount. You do this, turn in the work, and everybody is happy.

What’s the problem here? There is now a method in the data access layer that allows you to manually update a specific entry without reference to a transaction template. It’s existence implies that it’s okay to use it. The methods that accept the transaction template can validate the template to verify that the transaction will balance on debits and credits. This manual entry edit method can do no such validation. This means that it is now possible to get bad data into the system which could have catastrophic consequences. At this point, it is a matter of "when, " not "if" that will happen. If you or your manager considers "it’s faster” to be a general justification for violating the design of a system, then your project will become less maintainable as time goes by. You may need to update your design to make it faster to develop against—but that’s a different problem than I’m describing here.

In the legal system, the decision of a higher court on a relevant point is binding as legal-precedent for a lower court. Conversely, the decision of a lower-court on some legal matter is used as guidance to a higher court faced with the same decision. The reason for this is not that lawyers are crazy, but rather that the enormity of concrete circumstances possible in a legal case are too numerous for any one person or team to keep track of. When a new set of circumstances is considered by a court, it must make the best decision it can within the context of existing law and existing legal precedent. In most cases this keeps the range of legal issues organized in an intelligible manner. However, sometimes the courts make a decision that violates our sense of justice or propriety. In these cases, we can “refactor” by encouraging the legislature to explicitly change the law.

The key point is this: existing code is the best guideline for how to add new features to a code-base. You cannot expect future developers, to look at your code-base and infer the principles you built the application on if you are violating those principles yourself. Further, if you are willing to violate the design principles in one case, you will likely find it much easier to violate them again and again. This means that even though you “think” your application was developed according to a particular design, “with a couple of exceptions,” it will not be apparent to anyone else. Objectively the, the code was not designed according to any principles at all, but to your whims. To put the point another way, intent is communicated not by what’s in our heads, but what’s in our code.

Conventions often function as a substitute for failure to grasp design principles. For example, I’ve seen teams get up in arms about using Hungarian Notation but then write meaningless function names like “DoIt()” or “Process()”, or meaningless variable names like “intVar” or “intX”. These same teams often have little or no understanding of design principles , patterns, or concepts. I have met so many developers that have never heard of YAGNI, LRM, SRP, LSP, Dependency Injection. How many developers do you know that have heard of patterns such as Singleton, Adapter, Decorator, Factory, Monostate, Proxy, Composite, or Command?

The use of conventions is often invoked as a means of aiding code clarity. And it does, but it is not the only or even the best means of attaining that goal. We need to learn to name classes, functions, and variables in meaningful ways; to write small functions that do one tiny little thing, and do it well; to write small single-purpose classes. All of the conventions in the world will not help you maintain a code-base if developers are free to write 3000-line methods with 27 layers of nested-conditionals and loops (and yes, I have seen this). Read “Clean Code” by Uncle Bob.

Design patterns, techniques, and processes are much harder to learn and master than a concrete list of do’s and don’ts (which is what most conventions amount to). Good software design is like playing a musical instrument–it requires dedication, repetition, and practice to learn and master.

Conventions do have a place. However, conventions are usually suggested by the provider of the tools you are using. For example, Microsoft has a conventions document for the .NET Framework which is applicable to all .NET Languages. (Thankfully, they eschew Hungarian Notation). It is true that this is worth learning simply in order to be a good developer citizen. My recommendation would be to simply use the conventions established by the tool-provider, or the dominant conventions within the community around the tool. Don’t waste company time and money adding your own tweaks and changes to the conventions document. Speaking personally, I would much rather maintain a code-base that is written cleanly and with good design and that violates every convention you could name.

Conventions can be useful in another way. There is a good bit of discussion going on right now about Convention over Configuration. CoC is a design short-cut, and consists of making decisions about how components of a software system interact by default, and only adding additional documentation when components deviate from the norm. CoC actually bolsters my point here, because it only tends to arise as a discussion point in systems that are already using good design patterns and practices.